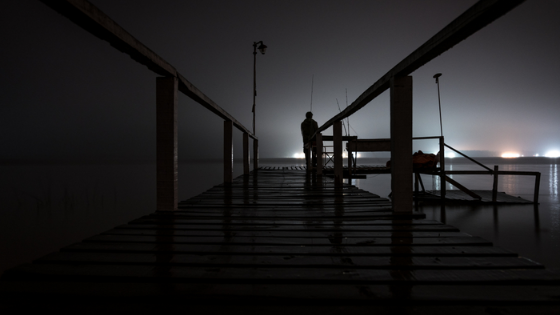 How well do you know your relatives? And I don’t mean knowing in the sense of being privy to the stories your great-aunt has from when she was in the Peace Corps. Are you certain that they are who they say they are? Would they even know if they weren’t?

These are questions that the Dunbar family struggled with for almost a century.

In 1912, four-year-old Bobby Dunbar disappeared while on a fishing trip in St. Landry Parish, Louisiana. After months of searching, a little boy matching his description was located, traveling with a man named William Cantwell Walters. But no one could be certain if this boy was actually Bobby. 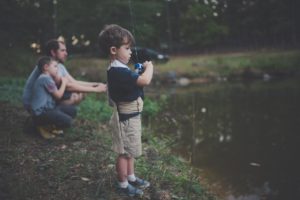 Robert Clarence “Bobby” Dunbar was the firstborn child of Lessie and Percy Dunbar, who lived in Opelousas, Louisiana.

In August of 1912, when Bobby was 4, the family took a fishing trip to Swayze Lake in nearby St. Landry Parish. On August 23, Bobby disappeared. The exact details of where he was when he vanished are uncertain, but the search for him lasted for last for eight months.

Authorities ran across a man in Mississippi, who was traveling with a boy who matched Bobby Dunbar’s description. His name was William Cantwell Walters, an itinerant handyman who specialized in the tuning of pianos and organs.

When questioned, he said that the boy he was with was not Bobby Dunbar – instead, his name was Charles Bruce Anderson – who went by Bruce – and was the son of a woman who worked for Charles’ family. He said that the woman, Julia Anderson, had given him custody of the boy.

Authorities didn’t believe him, and he was arrested for kidnapping. At the same time, the Dunbars were sent for so that they could come and confirm that the boy was, in fact, their son. Newspapers and reports at the time differed greatly on how the first meeting between Lessie Dunbar and this boy went.

One account said that the boy immediately shouted “Mother!” upon seeing her, and that the two embraced. Other accounts state that the boy only began to cry, and quoted Lessie in saying that she couldn’t be certain whether this boy was her son or not.

Yet more accounts state that both Lessie and her husband Percy were unsure, and in fact doubted the boy’s identity.

Similarly, contradictions exist in the accounts of the boy’s first reunion with the Dunbar’s younger son, Alonzo. Some stated that he recognized the baby immediately, called him by his name, and kissed him, but others said that he showed no signs of recognizing his baby brother.

The next day, after being allowed to bathe the boy, Lessie Dunbar said that she’d identified all his moles and scars and was certain that the boy really was her son after all.

They took him back to Opelousas, where he was greeted with much fanfare and a parade celebrating his homecoming. 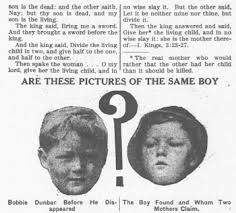 Shortly after the Dunbars returned to Louisiana, Julia Anderson arrived from North Carolina to support William Cantwell Walters’ claims that the boy found with him was actually her son, Bruce. Julia was unmarried and worked as a field hand for Walters’ family.

According to her, she’d allowed Walters to take Bruce on what was supposed to be a two-day-trip to visit another member of Walters’ family. It’s unclear how long Walters actually kept the boy, but there are accounts of Julia very clearly asserting that she had NOT given Walters custody of her child or consented to the trip being more than a few days.

Julia was presented with five different boys that were approximately the same age as her son, including the boy who had been claimed by the Dunbars as Bobby. When that boy was presented to her, there are no accounts indicating that he recognized her.

She asked whether or not he was the boy they’d taken from Walters, but she was not given an answer. Finally, she said that she was uncertain which boy was her son, or if any of them were.

The next day, she was allowed to see the questioned boy again, and further, she undressed him. After this encounter, she indicated a much stronger certainty that the boy, who at this point was assumed to be Bobby Dunbar, was really her son Bruce Anderson.

However, word had spread about her initial failure to identify him, and newspapers were questioning her moral character because she’d already had three children out of wedlock – the other two were deceased by this time. Eventually, she was discredited, and her claims were dismissed.

She had no money to sustain a drawn-out custody battle, so she left the boy with the Dunbars and returned to North Carolina. Later, she returned to Louisiana to testify at Walters’ kidnapping trial and push for the court to determine that the boy was actually her son.

The kidnapping trial, by all accounts, consisted mostly of testimony trying to determine who the boy was, rather than Walters’ innocence or guilt in the sense of kidnapping.

Many residents of Poplarville, Mississippi – where Walters and the boy had spent quite a lot of time during their travels – came to testify about Walters’ and the boy’s behavior. Some even asserted that they’d seen them together BEFORE Bobby Dunbar went missing on August 23.

Despite all of this testimony and evidence to the contrary, a court-appointed arbiter determined that the boy was indeed Bobby Dunbar, and William Cantwell Walters was convicted of kidnapping.

After the trial, the people of Poplarville welcomed Julia Anderson, who had become close with them during the trial. She moved to town and began a new life there, eventually marrying and having seven more children. According to testimony of her descendants, she became a devout Christian, helped found a church, and served as a nurse and midwife to the small community. Despite this apparent happy turn in her life, her children said that she spoke often of Bruce, the son she lost. The family regarded him as having been kidnapped by the Dunbar family.

After serving two years of his sentence for kidnapping, William Cantwell Walters’ lawyer was successful in appealing the conviction, and he was granted a new trial. Citing excessive costs, the prosecutors in Opelousas declined to try him again, and he was released.

Afterward, he continued to move around the US. He died on April 7, 1945, and was buried in Pueblo, Colorado beside his wife. 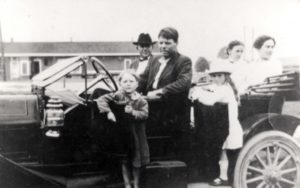 In 2008, Julia Anderson’s son Hollis recounted a story for This American Life – in 1944, the man known as Bobby Dunbar visited him in Poplarville, where they talked. Hollis’ sister Jules has a similar story of Bobby approaching her at the service station where she worked and talking with her for an extended period of time.

The Dunbar family has a similar story, which was relayed by Bobby’s son Gerald. The family was returning home from a trip and passed through Poplarville, when Bobby Dunbar said, “Those are the people they came to pick me up from.”

They then had a brief visit with members of the Anderson family. It was clear that Bobby Dunbar lived a life shadowed by doubts of his identity, but he seemed to live a good life anyway. He married and had four children before dying in 1966.

After his death, his granddaughter Margaret Dunbar Cutright began her own investigation into the kidnapping case. She searched through newspaper accounts, interviewed the children of Julia Anderson, and examined the notes and evidence presented during Walters’ trial and acquittal. Initially, she’d hoped to prove that her grandfather really was Bobby Dunbar, but her research ultimately led her to doubt that fact.

In 2004, an Associated Press reporter approached the Dunbar family about the story. Shortly afterward, Bob Dunbar, Jr. consented to undergoing DNA testing to have the issue resolved once and for all.

The results of the genetic testing showed that Bob Dunbar, Jr., the son of the man who was raised as Bobby Dunbar, was not related by blood to his supposed cousin, who was the son of Alonzo Dunbar.

These tests are considered conclusive, which means that the man who was raised as Bobby Dunbar wasn’t who they thought he was. The fate of the real Bobby Dunbar remains unknown, but Margaret Dunbar Cutright has a theory: she thinks that Bobby fell into Swayze Lake during the fishing trip and was eaten by alligators, which would explain why no body was ever found.

It is assumed that the man who was raised as Bobby Dunbar was really Charles Bruce Anderson, though no testing has been conducted to prove this. Nonetheless, the results of Margaret’s investigation and the DNA testing brought joy to the descendants of Julia Anderson as vindication of her original claims.

The same is true for the family of William Cantwell Walters, who maintained his innocence of the kidnapping charges and considers him fully exonerated.

Not everyone was happy with these results – Margaret said that her investigation was a point of contention within the Dunbar family, considering that the majority of Bobby’s children and grandchildren considered themselves rightful members of the Dunbar family and cherished those existing bonds.

Many were resentful of her, both for having delved into the matter at all and for having renewed the public interest in the case.

Unfortunately, a terrible mistake more than a century ago led to a long period of doubts, and relationships forged on a false certainty. We can only hope that the Dunbar family can move forward in the face of these discoveries and find their place in the fabric of the world.