Horrors Surrounding the Most Mysterious Shipwrecks Mystery fills the ocean. Nobody has ever discovered the entirety of its secrets and what it hides. Although scientists know only about seventy percent of it, there are still many things waiting to be discovered. The remaining thirty percent might be filled with wonders, or hide something else completely.

Something darker. Something more sinister. Something that might just have made its home in one of the many ships we’ve lost to the waters below.

In this article, we’ll be introducing you to some of the most mysterious ships that are considered artifacts of the past, even though they materialize in the middle of the ocean, and disappear quickly.

Though these ships seem to be exciting and are somehow considered marine legends, they actually continue to provoke fear in many people. The Flying Dutchman is one of many haunted ships, yet it left the maximum impact like no other by inspiring many paintings, books, films, and even opera shows.

Due to his unpleasant attitude towards God’s stormy weather, the Captain and his crew were cursed to sail the high seas. Captain Hendrick van der Decken had started his journey from Holland to the Far East Indies in order to purchase goods like silk, dyes and spices.

Throughout their journey, there had been many close calls, but they eventually arrived. After purchasing all the goods needed until the boat could not hold any longer, the Captain and his crew sailed to Amsterdam.

As his ship rounded the coast of Africa, Captain van der Decken thought it would be convenient if his employers, the Dutch East India Company, settled down at the Cape of Good Hope in South Africa to take a rest and stop due to turbulent waters. The Captain was deep in thought as his ship began to round the Cape. Suddenly, a terrible wave sprung up, threatening the ship and all on it.

The sailors urged their captain to turn around, but Captain van der Decken refused. Some say he was mad, but for whatever reason, the Captain ordered his crew to keep going. The huge waves became more threatening by the minute, and eventually, the ship sank. From that day on, the ship was cursed and so was the whole crew.

They still voyage the sea to this day, and many people have seen its sails. They say that if you look into a fierce storm brewing off the Cape of Good Hope, you will see the Captain and his skeletal crew. But beware; legend has it that whoever catches sight of the Dutchman will most certainly die a gruesome death. The Mary Celeste was discovered in the Atlantic Ocean in 1872. It was found in a completely unharmed condition with all its sails still up and the crew members’ belongings still on. The only things missing were the lifeboat, the captain’s logbook and, most importantly, the entire crew. There were many theories about this phenomenon, like waterspout killings and poisonous food.

On November 7, 1872, the Mary Celeste set sail from the New York Harbor on its way to Genoa, Italy. On board were Captain Benjamin S. Briggs, his wife, Sarah, and their 2-year-old daughter, Sophia, along with eight crew members.

Less than a month later, on December 5th, a passing British ship called Dei Gratia spotted Mary Celeste at full sail and adrift about 400 miles east of the Azores, with no sign of the captain, his family or any of the crew.

It was given a new name after a series of mishaps (including the sudden illness and death of its first captain and a collision with another ship in the English Channel).

The Mary Celeste would sail under different owners for 12 years before its last captain deliberately ran it aground in Haiti as part of an attempted insurance fraud. In 2001, best-selling novelist and adventurer Clive Cussler claimed to have found the wreck of the Mary Celeste, but later analysis of the wood retrieved from the ship he found showed that it was still sailing at least a decade after the Mary Celeste sank.

The most mysterious thing about the boat is why the crew would leave it. Theories over the years have circulated, from terrifying pirates attacking to giant octopi and sea monsters, while the most scientific was an explosion caused by fumes from the 1,700 barrels of alcohol on the ship itself.

Whatever the reason, though, it’s definitely a mystery that allows the imagination to run wild. The Lady Lovibond was prepared for sail the day before St Valentine’s Day, 1748. Captain Simon Reed planned a voyage along the River Thames towards the open sea and to then circumnavigate the Kent coast before heading out towards Portugal. Reed organized this entire trip as a honeymoon for his new bride, Annetta.

The evening of this voyage was very much a party atmosphere, with celebrations taking place all across the decks. With the exception of one man, John Rivers, the whole crew was pleased for the happy couple. Rivers actually served as Reed’s best man at the wedding ceremony.

Perhaps this was one of the things that aided what was to happen within several hours of the voyage’s beginning. Even though Rivers’s love for the bride was kept a secret, he conducted a plan to get some measure of revenge.

Six miles off the Deal Coast, not far from the Straits of Dover, is a geological feature known as the Goodwin Sands. This place is approximately ten miles long, lies between 8 and 15 meters below the surface of the English Channel, and has enough of a reputation to wreck something in the region of 2000 vessels along the years. One of those victims was the Lady Lovibond.

As the vessel made its approach to Goodwin Sands, Rivers made his move. A lot of alcohol only helped fuel his feelings of rage and envy, and compelled him to sneak up behind the acting Bosun and deliver a hard blow to the back of the man’s head. With the ship at his mercy, Rivers ran the Lady Lovibond aground on the shifting sands at Goodwin.

Exactly 50 years later, the captain of the ship Esenbridge recorded that he had almost collided with a ship of the exact description of  The Lady Lovibond. No evidence of the ship was found, though.

Another fifty years after that, the ship was sighted again, heading into the Sands accompanied with the sounds of celebrations. The last report of the ship was in 1948, when Captain Bull Preswick swore he saw the ship enter the Sands, surrounded by a green glow.

Some say the whole story is just a folktale meant to entertain. We just need to wait thirty more years to be sure. 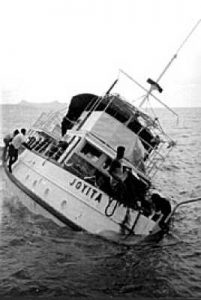 MV Joyita was a merchant vessel from which 25 passengers and crew mysteriously disappeared in the South Pacific in 1955. The ship was in very poor condition.

Despite this, its extreme buoyancy made sinking nearly impossible. Investigators were puzzled as to why the crew did not remain on board and wait for help. The boat had been scheduled to leave on the noon tide the previous day, but her departure was delayed because her port engine clutch failed. The Joyita eventually left Samoa on one engine. She was carrying 16 crew members and nine passengers, including a government official, a doctor, a copra buyer, and two children.

Five weeks later, on November 10, Gerald Douglas, captain of the merchant ship Tuvalu, sighted the Joyita more than 600 miles (1,000 km) west from her scheduled route, drifting north of Vanua Levu. The ship was heavily flooded (her port deck rail was awash) and there was no trace of any of the passengers or crew.

There have been many different theories about the disappearance, but the most substantial one that has stuck is that a broken pipe had been the cause for the flooding; the crew had probably drowned while trying to escape.

The Mysteries of the Oceans

Over the years, many discoveries were made; whether above or under water. Throughout many of these discoveries, scientists and explorers have come across many mysterious creatures and wrecks.

Most of the shipwrecks are pretty straightforward, yet there are many with enough lore behind them to make us think twice. Whether these wrecks were spotted adrift or with no crew members at all, the legends behind them definitely have us questioning what’s real and what’s not.

One thing is for sure, though. We’ll be keeping a close eye on the horizon when we set out to sea.