13 Scary Short Stories to Read in The Dark If you’re looking for a scare, there are plenty of places to get it. You can troll forums like Reddit and CreepyPasta, or go down a rabbit hole on YouTube while watching scary videos of clowns. But sometimes, you need a master, and there are few better than these.

We’ve curated some of the best scary short stories from the past 200 years; this list features masters like Edgar Allan Poe, Stephen King, and Roald Dahl, as well as some lesser-known names that are nonetheless incredibly good at fueling your nightmares, even when you’ve put the book down.

1. The Masque of The Red Death By Edgar Allan Poe Edgar Allan Poe has written quite a few scary short stories, but The Masque of the Red Death is one of the most atmospheric – which is why we selected it for this list.

First published in 1842, the story describes a masquerade ball held at the castle of Prince Prospero. The nobles of the land have gathered in the ball while a terrible plague known as “The Red Death” rages through the surrounding country.

Poe describes the masquerade and its ultimate catastrophes in gorgeous detail, and the creeping horror of the story is something that is difficult to match. The story hasn’t been adapted for anything more than a short film since 1989, but perhaps it’s time for a reboot. This short story, first printed in Stephen King’s Night Shift story collection in 1978, will give you nightmares for weeks.

It follows an aristocrat named Charles Boone, who, through letters addressed to someone he calls “Bones”, describes his arrival at Chapelwaite, a neglected ancestral home.

He and his manservant, Calvin McCann, come across a hidden map of a village known as Jerusalem’s Lot, which locals avoid like the plague – with good reason. And when they get there, they come across something unnatural… something that no one should ever see again.

Interestingly, Jerusalem’s Lot is also the setting for King’s 1975 blockbuster novel, ‘Salem’s Lot. Out of all of King’s scary short stories, this one is definitely one of the best. A favorite of most horror lovers, The Monkey’s Paw has been a part of certain classroom curriculums for many years.

It was first published in 1902 in a collection entitled The Lady of the Barge, and despite its fellows falling into obscurity, the story has yet to fade from the annals of history.

The White family was just going about their business when a friend drops in, Sergeant-Major Morris.

With him, he brings a mummified monkey’s paw, telling them that it grants three wishes. But when they try it, they discover that the results are more disaster than dream. There are, after all, consequences to playing with fate.

The twist on the common fairytale trope is refreshing, making The Monkey’s Paw compulsory reading for all horror aficionados. The narrative has been adapted for stage, screen, and radio several times, with the most recent film having been released in 2013.

4. The Graveless Doll of Eric Mutis by Karen Russel This one isn’t a typical scary short story – there’s no gore, no monsters, and no ghosts. That said, this story, and its creeping dread, will follow you.

Larry “Rubby” Rubio and his friends usually hang out near a big pin oak in the park. One day, they find something tied to it – a doll, or maybe the more accurate term is scarecrow.

The problem is, they recognize it. It looks exactly like a kid that they mercilessly bullied. And it’s not going away.

This tale of bullying, guilt, and the unknown will leave you gutted – there’s something peculiarly existential about the narrative, and its more frightening than any monster or serial killer ever could be. This psychological horror story is a cornerstone of feminist literature, but that doesn’t mean that it won’t scare the pants off you.

Originally published in the January 1892 edition of The New England Magazine, it’s told as a collection of journal entries penned by a woman who is under treatment for “hysteria” – a common condition diagnosed in women at the time.

Confined to the room and descending into madness, the woman devotes more and more time in her entries to describing the room’s lurid yellow wallpaper that has become her prison.

Eventually, she begins to believe that there is something – or someone – behind it… First, there was a wonder drug – a cure for cancer. Then, there were consequences. Decades after the cure hits the market, it’s discovered that the children of those who use it are afflicted with a disease that makes them dissociative and violent.

The disease can be controlled, but those with “Duryea-Gode Disease” (DGDs) are still ostracized and mistrusted.

This beautiful, horrifying science fiction novelette was first published in Omni in 1987, and it asks questions that are way ahead of its time – and remain relevant today.

Butler doesn’t flinch from the horrifying realities of the disease that she has created, and her themes are both graphic and incredibly moving.

7. The Willows by Algernon Blackwood This creepy, weird novella is thought to have been one of H.P. Lovecraft’s favorite works by Blackwood, and it shows.

First published in 1907 as part of his collection The Listener and Other Stories, Blackwood tells of a pair of friends that, while on a canoe trip, begin to feel like the river and the forest around it are alive, and malevolent.

This lush, strange narrative will instill you with an unpleasantly pleasant mix of dread, paranoia, and terror – something that only the best horror can do.

And though Algernon Blackwood’s other works are also exceptional, The Willows is his portfolio piece, so if you’re looking to dive into his work, this tale is the best place to start.

8. The Landlady by Roald Dahl 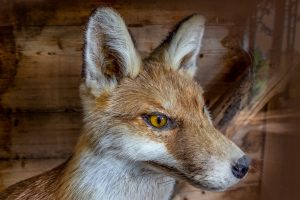 I know what you’re thinking – Roald Dahl, the beloved children’s author and mastermind behind Charlie and the Chocolate Factory, cannot possibly be on this list.

You’d be mistaken. Dahl is known for his surrealist and slightly disturbing fiction, even in his children’s books. The Witches is a perfect example of this.

His short stories merely take these techniques and simmer them into tales that will make you shudder.

Billy Weaver has been traveling for a while when he decides to stop at a cozy little bed and breakfast.

Inside, he meets the sweet, friendly landlady – who happens to also be an avid taxidermist. Dahl states that he has always wanted to write a ghost story, but never could manage it – he says that this is the closest thing.

I can tell you, it’s much more terrible than a ghost story. Finally, a ghost story. M.R. James included this little gem in his collection entitled Ghost Stories of an Antiquary, published in 1904.

He writes of a Cambridge professor named Parkins, who starts poking around in a Templar ruin while on holiday – a terrible decision, really.

He finds a whistle inscribed in Latin. Unaware of what he has come across, he blows the whistle. The days following plunge him into a vortex of nightmares and apparent paranormal activity.

This story has all of the elements of a good campfire ghost story, and it has a moral: don’t play with artifacts you dig up from ruins.

The BBC has adapted the story to film twice, once in 1968 and again in 2010. The phrase found on the flute, “Quis est iste qui venit” (Who is it that comes?) also appears in Silent Hill: Shattered Memories, written on the side of a cabin.

10. The Lottery by Shirley Jackson This classic starts out idyllic, but devolves into something horrifying. A small New England town is engaging in it’s annual ritual, known as The Lottery.

The tradition is made to ensure a good harvest, and it’s simple: ballots are made, and each patriarch of each family in town draws a slip from the box. Whoever draws the slip with the black spot has been chosen.

This terrifying tale of mob mentality and the consequences of tradition was first published in The New Yorker in 1948, and it resulted in a huge flood of letters about the story, demanding an explanation for Jackson’s admittedly unfavorable portrayal of small-town America.

The tale has been adapted for radio and TV dozens of times, and references to it even appear in an episode of The Simpsons. Out of all of our scary short stories, The Lottery is the most prolific.

11. Escape from Spiderhead by George Saunders Another sci-fi gem, Escape from Spiderhead is the most recent of the works on our list, having been published in the December 20, 2010 issue of The New Yorker.

It chronicles the story of Jeff, a test subject under the “care” of Dr. Abnesti, who has been testing cocktails of drugs that control someone’s emotions on the people trapped in his facility.

The real horror of this story is the possibility that there really are scientists like Dr. Abnesti out there – those who lack morals, ethics, or care for human life.

Saunders explores how much control we actually have over our emotions, and chronicles a chilling fight to take control that some of us could only conjure in our nightmares.

12. Where Are You Going, Where Have You Been by Joyce Carol Oates If you didn’t know any better, you’d think that this story is a work of true crime. Connie is a typical teenager – self-absorbed, wild, and boy-obsessed.

One day, two men pull up in a gold convertible, and Connie goes with them – never realizing what she has gotten herself into.

The story first appeared in the Fall 1966 edition of Epoch Magazine, where it was dedicated to Bob Dylan because Oates said that she had been inspired to write the tale after listening to “It’s All Over Now, Baby Blue.”

It is also based on three murders committed in Tuscon Arizona in the 60s, by a man named Charles Schmid – the press called him “The Pied Piper of Tuscon.”

13. A Collapse of Horses by Brian Evenson This last uncanny number is similar enough to The Yellow Wallpaper for the connection to be drawn, but their themes and results are markedly different.

The narrator, whom Evenson leaves unnamed, is bedridden after an accident, with nothing to do but obsess over two things: the layout of the house, and the horses lying in the paddock outside.

Obsession, as we know, leads to disastrous consequences, and A Collapse of Horses is no different.

This particular collection by Evenson contains many references and homages to some of his most well-respected predecessors, and one can assume that this story is purposely echoing The Yellow Wallpaper. Nonetheless, it’s an incredible read, and shouldn’t be left out of anyone’s reading list.

A Collection of the Strange and Wonderful

So there you have it; thirteen scary short stories to chill your blood and make you afraid of the dark. There are hundreds of stories like these available in libraries and magazine archives everywhere, but this selection is a good place to start.